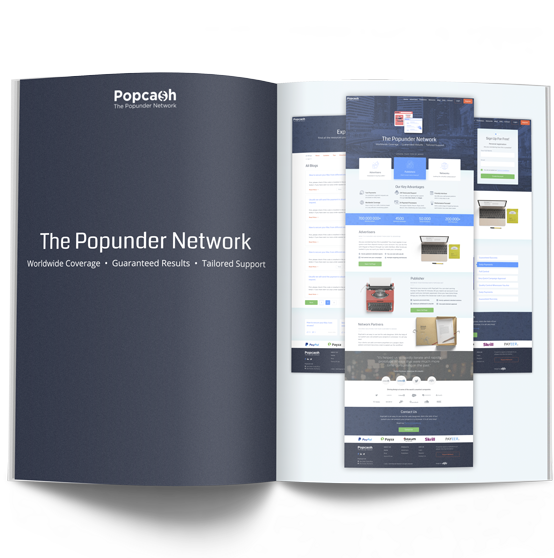 The idea of PopCash was born in early 2012 and, after a few months of planning, Alex and Radu began sketching out the concept.

On the 20th September, 2012, the first internal tests were being carried out. On the 1st October, the first version was officially launched.

Right from the beginning, our platform rapidly began building momentum. Along with its sharp growth in popularity, as could be imagined, workloads began to increase. This pushed us to recruit more talented people in order to deliver new features at an increased development pace.

One year later, we also began focusing on mobile traffic, which was, and still continues to be, in full expansion. 2013 was also remarkable for the fact that we reached the 1 million daily views objective.

By 2015, we were receiving more than 500 million unique monthly visitors, entering the Alexa Top 500 Global Sites.

Since 2012, both our development and our support teams have grown, reaching 10 colleagues, and PopCash moved its operational office to a much larger space.

Along the way, our platform has continuously improved and, as of 2017, we are proud to announce a new and completely redesigned version, which boasts an impressive, attractive and user-friendly design.

Some Reviews of PopCash

Here's what the people have to say

When affiliates talk about pop ads, PopCash is the first name that arises. It forms one of the best popunder networks globally! It helps you earn income through attractive offers. Also, it's convenient for businesses that would like to purchase traffic.

If you have not registered on the network, this is the best time to get started. It has attractive offers, reliable support, a user-friendly interface, and the best routine for targeting and optimization. PopCash could be all you have been waiting for to achieve financial success and boost your future. Do not let this opportunity slip through your fingers!

PopCash.net is one of the largest and most well-known popunder ad networks. With a huge amount of traffic and Tier 1 countries, it represents a great opportunity for advertisers to get valuable traffic and for publishers to make money.

PopCash is by far the most responsive ad network i've come across. I've never needed to contact support (because I've never had any issues) but they are extremely speedy when it comes to getting your domain approved. Usually it takes just a couple of hours (if at all). This means you can get started placing ads right away.

PopCash is by far the best popunder network I've come across – they have the best rates in the industry, super fast payouts and a great backend.

When it comes to the online advertising segment, the popup advertising has a special place. The PopCash is one of the best popunder ad networks in world. Launched in 2012, this network is serving many big advertisers and premium publishers worldwide.

PopCash is a highly specialized popunder advertising network. Even though popunders, and especially popups, have been notorious for annoying visitors, advertisers still prefer using them, mainly because of their high conversion rate. PopCash uses a popunder ad scheme where the ads are shown in a new window, underneath the current browser. Advertisements are triggered by visitors clicking anywhere on a website which has loaded the PopCash ad code.

PopCash uses a dynamic bidding system. Your traffic rate depends on a variety of different factors, such as traffic quality, end-user location and advertiser demand.

PopCash offers and accepts payments through most of the major payments processors and gateways, such as PayPal, Paxum, Skrill and Wire Transfer. Payments are processed on a daily basis, with low minimum amounts of 10$ for cash out and 5$ for deposit. This provides a perfect opportunity for everyone who is just starting out and doesn't have a large advertising budget available.

Proper use of the PopCash graphic elements will help attract more customers to use your services. PopCash offers designers raster and vector graphics. If required, we can also provide other various elements that might be of interest. For any requests, please contact us.